S - Scripture
Psalm 36 v. 6  Thy righteousness is like the mountains of God, Their judgments are like the Great deep; man and beast thou savest, O Lord.

O - Observation
Mountains of God. What are some of the mountains of God? Mount Sinai. The place where God gave Moses the ten commandments. The place where God personally interacted talked to a human. Where, out of his love God gave us direction, guidance towards how to live a life to the fullest. Mount of Transfiguration. The place where Jesus revealed himself to Peter, James and John. Once again God spoke to them and said, "This is my beloved Son, with whom I am well pleased. Listen to him." Golgotha. The mount, the hill to which Jesus paid the price for you and I. Earlier, God told us to listen to him. Jesus told us on Golgotha that "It is finished". We are saved!!!

A - Application
Do I visit in my heart these 3 mountains of God?

P - Prayer
Heavenly Father, Thank you for these mountain top experiences.  Love Will 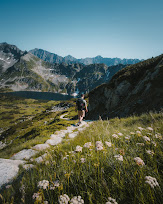 Photo by Josh Hild on Unsplash